The Story Behind Carmen Care

“After laser therapy gave my daughter, Lee, her life back, I vowed to help others find relief from debilitating pain and despair. I’m overwhelmed at the powerful results I’ve witnessed.” – Leslie Carmen, Founder of Carmen Care

“What I love about my mom is that there is no challenge too great to undertake, and I’ve seen countless miraculous recoveries, mine included, from laser therapy.” – Lee Carmen, daughter of Carmen Care Founder, Leslie Carmen 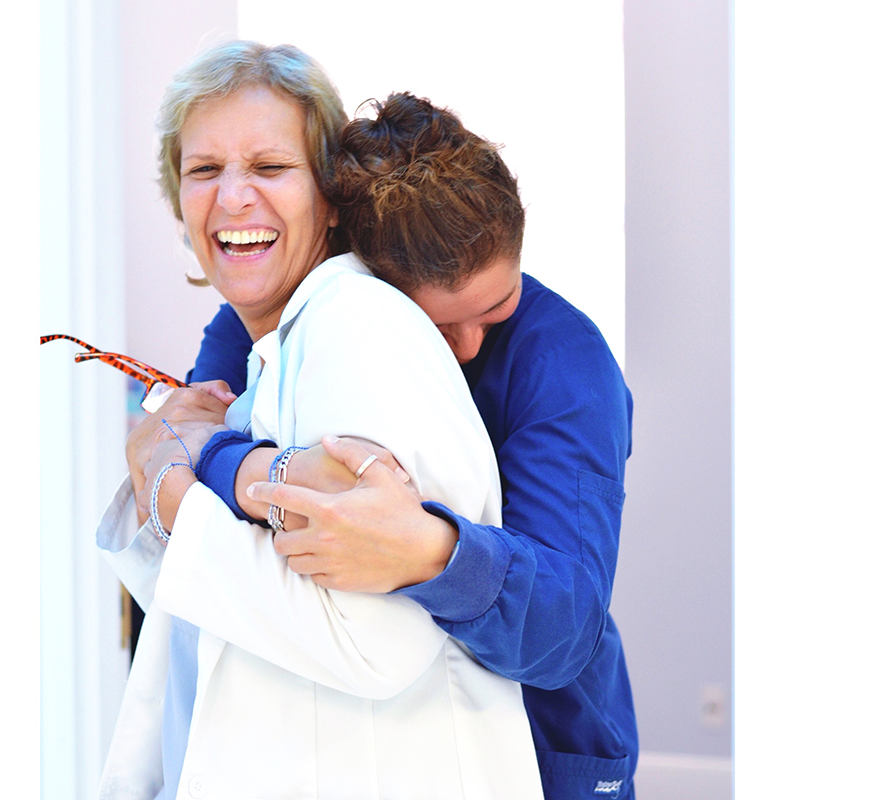 In 2010, Lee was a rising ice hockey superstar enjoying college on a full scholarship in Lake Placid, New York. She was a happy and healthy teenager, dreaming of a future in the NHL, and one day, becoming a professional songwriter.
Then the pain started.

First, it was just one tooth that started to hurt after crunching on a piece of ice. She visited her dentist, but he couldn’t help or find the source of her pain. It soon escalated to her bottom, right jaw where a recurring stabbing sensation lasted for nearly 60 seconds each time. Then, her head was in constant pain and she was experiencing debilitating shocks.

Lee sought help from numerous other dentists and physicians and none of these medical experts could identify the cause. She was prescribed pain medication to ease the symptoms, but her results were marginal and short-lived. One night Lee woke up with excruciating, stabbing pain in her jaw. Instead of subsiding and resuming every few minutes as it had previously, this pain was constant and unbearable. She called her mom, Leslie, in Florida and she told her to go to the emergency room. Terrified, Leslie and her father fled to the nearest airport to find the first flight to New York.

The ER staff set her up with an IV and pumped her full of medication to help numb the pain while they performed X-rays, MRIs and cat scans, and every test came back clear. Hours passed. Doctors shuffled in and out of her room, each performing their own evaluations. Lee’s parents arrived just in time to hear the diagnosis.

Trigeminal Neuralgia. The ER doctors had limited experience treating this debilitating condition, so the best they could do was prescribe Oxycodone and send them on their way.

Lee and her parents flew back to Florida the next day and immediately saw a neurologist. They had two options, medication or brain surgery. The obvious choice was medication. Lee started on a low dose and had some success until she plateaued and needed a higher dose. This happened several times. With each increase in medication, the side effects increased until she was in a constant state of confusion and spent most of her days in bed. The happy and healthy teenager with big dreams vanished.

Lee’s parents were fraught with concern for their only daughter. Leslie spent countless hours researching through her tears to find alternative therapies to help her daughter. One night, she found an article about laser therapy and how it had successfully treated patients with a variety of ailments, including Trigeminal Neuralgia. The closest laser clinic was in South Carolina. They immediately packed their car and drove up the next day.

Twelve hours later, Lee received her first laser treatment. She went to the clinic twice a day for two weeks to receive a total of 28 laser sessions. Lee’s pain subsided with each visit, but it would take 4 to 6 weeks for the lasers to reach their full potential. After her last treatment, she started to wean herself off the pain medication. One month later, Lee was almost pain-free and functioning like a healthy teenager again. A month after that, she was completely pain-free and back on the ice playing hockey with her teammates in Lake Placid.

Nobody could believe it. Did this laser really cure Lee from Trigeminal Neuralgia? Why didn’t the medical experts suggest laser therapy as a treatment option? Although Leslie was overcome with relief, she was incredulous at the lack of information and resources available for people suffering from Trigeminal Neuralgia. At that moment, she decided to dedicate her life to promoting laser therapy. Just three years later, Leslie and Lee opened Carmen Care.

Since 2013, the clinic has successfully treated thousands of patients and Leslie is regarded as one of the country’s leading experts on laser therapy. Lee is a lead laser technician and works with her mother every day…she still plays ice hockey and helped her team win the national championships in 2014.

Almost two years ago, a dentist changed my life forever. A simple procedure catapulted me to the fith circle of hell. My life was completely flipped upside down and changed my life forever. When I felt like “I am not going to make it” my husband read online article about laser therapy and successful treatment for Trigeminal Neuralgia. As he did more research he found “Leslie and Carmen Care”. At this point it did not matter that she was on the other side of the country, because after talking to her I knew I can trust her completely and more I knew that she knows how bad is the pain I’m going through. I booked my flight and came to see her immediately. At the “Leslie and Carmen Care” I met wonderful therapists: Leslie, Lee, Heather and Nicole. At first, I did my treatment for 10 days and I felt like it was helping me more than all kind of medication I was put on by my neurologist. After coming back home I knew I have to go back to Florida for full 21-day treatment. Already after 10 days of treatment I felt that it was helping me with the unbearable pain I was going through. I could brush my teeth again, finally eat more food and most important it gave me a hope that one day I can recover from this horrible condition. This hope helped me to fight clinical depression as well. Whoever suffers from Trigeminal Neuralgia knows how unbearable pain this is and how depress you could become because the pain is so real. One of the therapists at the “Leslie and Carmen Care” had that pain herself and she was very helpful and understanding. She was telling me everyday: “This will get better, this will get better”… As I am writing this, I am crying because this girl was fighting for my life and she knew how much help I need. To express how great the therapists are – in 2020 I decided to leave the state I was lived in for many years and move to Florida, so I could live next to that wonderful clinic. This is by far the best decision of my life to move across the country just to live nearby the clinic. There are no words than can express what those wonderful ladies did for me. They are full of compassion, loving and always ready to listen. I know that maybe for some people these are just the words, but these therapists know that they literally saved my life. Forever thankful!! I love You, ladies with all my heart!!! Thank You! Thank You! Thank You!

View All Our Reviews